A proud member of the local community

We at the MGRA see ourselves as more than a Racing Club. Our board and staff are 100% invested in supporting local communities and businesses through investment, activities and participation and with our venue. As a not-for-profit organisation, focused on Greyhound racing and welfare we understand the bigger picture. Governed by the Greyhound Racing Victoria (GRV), the association races under the rules and regulations of this body and aims to promote Greyhound Racing as a vibrant, entertaining and thriving sport with animal welfare at its heart.

We also supports the local and wider community in many ways. One such way is through the use of a local Community Funding Grant. The fund invites non-for-profit organisations in the local area, that are involved in health, education, sport and recreation, to apply for funding to support their local initiatives. Each year we grant up to $50,000 in funding to these organisations and engage ourselves by offering our venue to use, as well as our marketing channels, to support and assist them.

For example MGRA plays a prominent part in the Northern Melbourne community, partnering with the Hume City Council, a range of local sponsors, families and the Northern Football League, which includes 35 football clubs and a netball club. 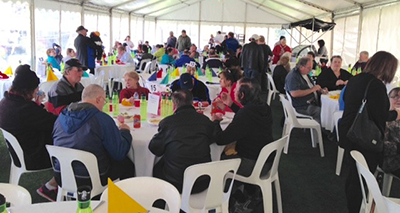 Community groups at The Great Chase Grand Final marquee at The Meadows.

We also offers community organisations facilities for fundraisers and charity days and host events such as the TAB Great Chase Community Event, culminating in the Great Chase Grand Final, where community groups share over $40,000 in prizes while enjoying a great day at the races.

Greyhound Racing in metropolitan Melbourne contributes over $234.1^ million in value-added impact to the economy. It’s far wider reaching  and important to the local community than many expect. Just in the City of  Hume it provides full time employment to 255^ people and a further 1339^ across Melbourne.

There’s a lot of misinformation around greyhound racing. Those with political and social agendas use outdated information and manipulated figures to twist the truth. But the facts tell a story of happy, healthy dogs who love to run, are loved, and are companions as well as elite canine athletes.

Greyhound racing is a sport like other forms of racing – but more importantly to the owners, trainers, club officials, and others, it’s a family. In this family, the most important, pampered, and respected members are the dogs themselves.

You can learn more about greyhound racing at www.greyhoundfacts.com.au

GREYHOUNDS ARE MY LIFE

The Meadows (MGRA)
Marg discovered greyhound racing in her twenties when she was given a young greyhound to train. Not long after, she started working as general manager at the Traralgon and then Geelong Greyhound Racing Clubs before moving to the Melbourne Greyhound Racing Association (MGRA), first as racing manager and then as general manager at Olympic Park. Marg oversaw MGRA’s move to its new purpose-built venue in Broadmeadows, ‘The Meadows’ which is now one of the world’s leading greyhound racing clubs, home to many major race meetings including the Australian Cup and the Sky Racing Topgun. Marg was inducted into GRV’s Hall of Fame in 2016. View video here

The Meadows (MGRA)
Both Cory and Chris grew up in families that raced greyhounds and helped train and care for their parents’ dogs from an early age. Cory joined the Meadows in 1998 as it was being built, helped lay its track and has been looking after it ever since. Chris was working at Bendigo Greyhound Racing Club when Cory recruited him to come at work at the Meadows. Today, they lead a team that keeps the venue’s racing infrastructure in peak condition while ensuring the club’s outdoor facilities are at their best for the many big events that Meadows hosts, especially the Australian Cup. View video here

TELL US YOUR STORIES

Historically, the people in greyhound racing have always generously shared their expertise with their peers. Tell us your stories. Tell us how you raised your pups so that they are socialised early. Tell us what you do when you put integrity and the welfare of the dog in front of everything you do.

On this page, we’ll share your stories as well as keeping you informed of the latest club’s community news.

Tell us also what stories you’d like to see.