It’s an early start to the 12-race card at The Meadows on Wednesday, with the opener getting underway at 11:27am. Maelynn Bale has drawn Box 3, and she looks poised to make it a hat-trick. She has been beginning fast in her recent races, and clocked 30.22 when winning at Cranbourne last start. She steps up to the 600m trip for the first time on Wednesday, but the way she’s been running out her 500m races suggests that the extra distance will be no trouble.

In Race 2, a 525m maiden, Smoke Bush Drive looks one of the best of the raced brigade. Although Box 8 isn’t ideal for him, he’s demonstrated that he’s capable of showing some early pace, and if he manages to get across early, he’ll be strong to the line. 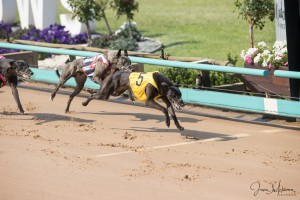 Palesa Bale will be looking for back to back victories tomorrow

A case can be made for a number of greyhounds in Race 3, including Palesa Bale who will jump from Box 2. She broke maidens here last week when she led throughout off Box 5 in 30.53. As they say, box speed is gold, and if she pings away again this week, she has to rate a winning chance.

As soon as we don’t tip Tanner Max, he’ll win, so we have to stick with him again this week. While he hasn’t been picking the jump lately, he also hasn’t had the rub of the green in his recent races. He’s capable of a better beginning, and if he gets through the first turn unscathed on Wednesday, he’ll be hard to run down in Race 4.

Shima Glow looks the one to beat in Race 5. She led for most of the way here last week over 725m, and fought on strongly for second in 43.03. She drops back to the 600m trip on Wednesday, and is a good chance of leading from start to finish over the shorter trip.

Kraken Sue has had no luck off tricky draws in her past three outings. Forgive those, and go off her prior excellent form at Bendigo. She’s expected to jump straight to the lead off Box 1 on Wednesday, and it’s hard to see anything catching her in Race 6.

Tyler Durden is much better than his formline suggests, and he gets a winnable race in Race 7. He’s been racing top-class greyhounds in Victoria and NSW in his recent assignments, and should find this 600m Grade 5 heat much more to his liking. He just needs an ounce of luck in transit to show his best.

Mepunga Felix is a multiple Group-race finalist, and he gets a good opportunity to chalk up another victory in Race 8. He should find Wednesday’s opposition much easier than who he’s been facing lately, and should be hard to hold out.

In Race 9, Zipping Norman is shooting for three straight wins. He caused an upset when leading throughout at Sandown last start in 34.16, and prior to that, dug deep to win here in 30.20. If he lands near the pace again on Wednesday, he’s also likely to be prominent at the business end.

In Race 10, Resurgence is a must-include. He’s found early trouble in his past couple of races at The Meadows, whereas he began well at his previous start when he won easily at Ballarat in 25.45. Providing he makes a clean getaway, he’s a leading contender on Wednesday.

Playlist is a class act, and he has to rate a winning chance in Race 11. He was good enough to win the Group 1 Vic Peters at Wentworth Park in July last year, and he’s expected to be ready to roll after a couple of months off on Wednesday.

Race 12 is a small but even field, and Westar Aileen is one of a number of chances in the race. She began fast here two starts ago, and only faded over the concluding stages, clocking 34.75 in second. The 525m trip is probably more her go, and she’s capable of leading from start to finish this week.