Rebel Riot looks hard to hold out in the opener at The Meadows on Saturday night. He was eye-catching here last week when he made up huge late ground, clocking 30.09 in second. He’s likely to be too strong for them this week. 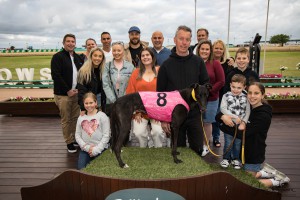 In Race 2, Wedding Or Baby looks the one to beat. He caused an enormous upset in his semi-final of the Launching Pad at Sandown two starts ago when he came out running off Box 5 and clocked 29.69 in victory, and followed that up with a fifth in the Group 3 final. He’s a big chance of leading throughout on Saturday.

Barooga Dodge is getting costly for punters lately, but deserves one more chance. He’s expected to settle handy to the pace off a cosy draw on Saturday, and from there, he should simply be too good for the opposition in Race 3.

Barooga Smoke was sublime winning the Group 3 Easter Gift at Sandown last start, when he jumped straight to the lead off Box 1 and strode away to win in a scintillating BON 29.16. While Box 8 isn’t ideal for him on Saturday, it’s only a small field, and he has the demonstrated talent to go back-to-back in Race 4.

A case can be made for a number of greyhounds in Race 5, including Hill Top Jack. He never gave anything else a chance here last start when he found the early lead and extended strongly to win in 29.96 by three lengths. A similar performance on Saturday will see him go close again.

In Race 6, Silver Lake is a standout. Forget his last start miss at Ballarat which was a total forgive run. This is a greyhound who has clocked 29.14 at Sandown and with an ounce of luck, he’ll be winning on Saturday.

Scatterbox is back in winning form, and he could cross the line first again in Race 7. He was never headed here last week when he clocked 30.23 in winning, and with his excellent box speed, he has to rate a chance again on Saturday.

With 13 wins from 26 starts to his name, Nangar Rust has a brilliant strike-rate, and he was an excellent all-the-way winner at Sandown last start in BON 33.81. There’s no reason he can’t repeat the dose in Race 8.

In Race 9, Wynnum Star looks the one to beat. She got into her work quickly here last week, and stuck to her task gamely, clocking 29.95 in second. Off Box 1, she is drawn to lead from the get-go and could be too good.

In Race 10, Emmy’s Shark is one for the multis. This former NSW chaser has been excellent since arriving in Victoria. She tried hard when finishing second at Bendigo last start, and was terrific when leading throughout at The Meadows prior to win in 30.02. She’s expected to begin fast on Saturday and they may not be able to catch her.

Tanner Max isn’t the quickest of beginners, but he gets into his work fast, and it was only a couple of months ago that he won here impressively in 30.04. He just needs clear air early, and from there, he should be able to show his best in Race 11.

In Race 12, Mohinga Chase is shooting for a hat-trick of wins. He made up excellent mid-race ground here last start to win in 30.27, and while he isn’t usually fast away, he has great mid-race burn and will be attacking the line well on Saturday.