Race 1 at The Meadows on Wednesday kicks off with a 600m Restricted Win race, and Off It’s Chops is a winning prospect in the opener. His last start miss at Sandown was a total forgive run, but his prior 29.59 win there was excellent. This will be his first attempt over 600m, but the way that he’s been attacking the line in his recent races suggests that he can handle it.

Maelynn Bale is a leading contender in Race 2. She’s only had two race day starts, and has finished second in both. She didn’t get all favours in transit here last week and arguably should have won but for a few hefty bumps, but with a clean passage on Wednesday, she can atone for punters.

Jax Star has the benefit of Box 1 in Race 3, from where he looks dangerous. He began fast off Box 7 at Geelong last start and was never headed, clocking 22.53 in victory. If he begins like that again on Wednesday, he’s a big chance of making it back-to-back wins.

In Race 4, Rockstar Haynes may represent some value. He began fast at Sandown last start, but found trouble going into the first bend which put paid to his chances. He’s drawn closer to the rails on Wednesday which should assist, and he has the potential to lead throughout from there.

Kenny The Brute looks tough to roll in Race 5. He comes into the race with strong 600m form, and while he can begin fast, he is also capable of winning regardless of where he lands early. He looks like one for the multis on Wednesday.

Star Blazer is better than his recent formline suggests. He’s been contesting some tough races lately, and his average beginnings haven’t helped. A superior draw and easier field should make the difference for him in Race 6. 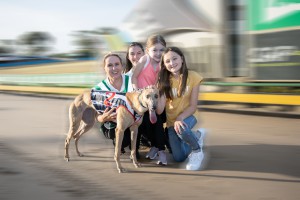 In Race 7, Aston Silk is a big chance of leading throughout. She’s armed with terrific box speed, and led for a long way here last start, before eventually being run down and clocking 29.93 in second. They may not be able to catch her this week.

Not Happening is a clear standout in Race 8. He was brilliant winning here last week, when he settled in midfield early, and then powered home to win in BON 34.24. A repeat performance looms on Wednesday.

In Race 9, Fire And Fury could lead throughout. He showed great mid-race acceleration at Cranbourne last start, and was only nabbed on the line, finishing second in 30.41. If he picks the jump on Wednesday, he could be hard to catch.

In Race 10, Hill Top Jack deserves to go on top. He’s the winner of four from eight so far, and wasn’t far away when fifth here last week in 30.08. At his prior start, he led throughout to score here in 29.91, and a similar performance on Wednesday would see him go close again.

Fernando Mick is a must-include in Race 11. He was beaten by the barest of margins by a smart one here last week when finishing second in 29.84, and he looks poised to go one better this week if he gets an ounce of luck in the running.

Race 12 isn’t the easiest to sort out, but Parzival does have the benefit of a vacant box to his outside and he looks a solid each-way prospect. He was sent out at big odds here last week, and ran on well for second in 30.52. He’s expected to hit the line well again on Wednesday, and could feature at the business end.