A 525m maiden gets the day underway at The Meadows on Wednesday. Tom The Cheap looks the best of the raced runners, having previously placed at the track in 30.33. He finished fourth at Geelong last start, when he encountered significant mid-race trouble and recovered well to make up excellent late ground. With an ounce of luck, he should be featuring in the finish.

In Race 2, Jump Into Action appears to be one of the standout bets of the day. Although this will be his first attempt over the 725m trip, he has been finding the line well over 600m in his recent races, and the extra distance now seems like it will suit.

Tears I’m Here is aiming for back-to-back victories when she begins from Box 1 in Race 3. She caused a big upset when leading throughout here last start in 35.17, and if she picks the jump again on Wednesday, she could be off and gone if there’s any trouble in behind.

Arizona Gold looks hard to beat in Race 4. His last start miss at Sandown is best forgotten; he enjoys racing at The Meadows and Box 1 suits him down to the ground. Providing he isn’t too far off them heading into the first bend, he should be too strong for them late.

She’s So Amazing has been knocking on the door to get another win. She generally begins well, and if she gets an unimpeded passage in the early part of the race, she could be hard to run down in Race 5.

In Race 6, Rostered Off is a huge winning chance. He was totally luckless at Sandown last week, but led throughout to score in BON 29.20 at Sale prior to that. While he’s stepping up to the 600m trip for the first time, his breeding suggests he should easily handle it, with his dam Bells Are Ringin having won the Group 1 Sandown Cup back in 2016.

Aston Ulysses looks one of the leading contenders in Race 7. He led for a long way here last start, and was only collared late, clocking 34.70 in second. A similar performance on Wednesday will see him going close again.

In Race 8, the 600m trip now looks perfect for Mepunga Royal. While he’s not the quickest out of the boxes, he owns an enormous finish, and he’s expected to power to the line on Wednesday.

Vice Grip is worth consideration in Race 9. A littermate to Rostered Off in Race 6, this son of Aston Dee Bee and Bells Are Ringin is another who should handle the step up to 600m. He has a terrific record off Box 1, and just needs to make a clean getaway to be competitive in this field. 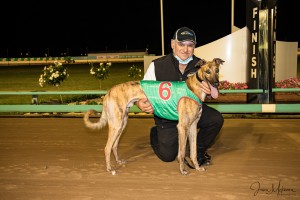 Keenando is an each-way prospect in Race 10. His last start miss at Sandown was a total forgive run, while his second there prior was terrific, when he nearly got up to score on the line, clocking 29.44 in second. The small field suits, and he’ll take some beating.

Mr. Mufasa was bounced around like a pinball soon after boxrise here last start, before being completely taken out of the race going into the first turn. Forget that run, and go off his prior 30.12 win here, when he mustered good early speed to take the early lead and run away to win by nearly three lengths. There’s no reason he can’t put in a similar performance in Race 11.

In Race 12, a case can be made for a number of greyhounds, including Eight Ball who has the benefit of a vacant box to his outside. He made up lengths late off the winner here last week, when finishing second in 30.26. If he finds clear air in transit, he’ll be hitting the line hard late.