Sharp Runners to Step Out 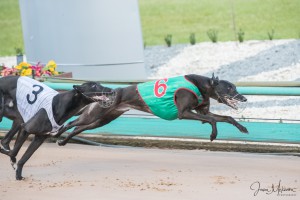 Husband-wife training combination Jason and Jessica Sharp kick off their Saturday night at The Meadows with a winning chance in Race 1, Aston Lavinia.

The daughter of Barcia Bale and Aston Tara is only having her fifth race day start, and has come up with Box 5. Although she was well beaten in a hot field at Sandown last start, she was impressive when leading throughout at The Meadows prior in 30.12 off Box 2.

“She went better off the inside – I’m not sure about her off the middle. There’s a bit of speed on her outside, so hopefully she gets away,” says Jason Sharp.

In Race 6, Junk Food Junkie will jump from Box 7. She was good enough to qualify for the Group 1 Peter Mosman Opal Final at Wentworth Park back in July, and only three starts ago, finished third in a Group 3 at Sandown. She competed in a match race at Ballarat last Saturday night, and led Catch The Thief for a long way on that occasion, before being run down late.

“There aren’t many bitches who can hold off a dog like that (Catch The Thief) over that distance. I thought she went really well, and I was surprised by her time,” says Sharp.

“She should be right in this. There’s a few dogs with ability in it, so she’s just got to step. She’s probably drawn out where she wants to be – she seems to want to be out wide on the track, and doesn’t seem to like getting jammed up on the fence.

“She just needs to get away – she’s probably my best of the night.”

Route Sixty Six has drawn Box 5 in Race 8, and comes up against some talented opposition. He encountered mid-race trouble at Sandown last start, and found the line well for third in 29.60 there at his previous start.

“He’s drawn the middle and there are too many good dogs in this race – he’ll need a lot of luck,” says Sharp.

“Full Moon Party is probably going a bit better than her (Aston Antoine). He’s got to try and step in the first three – he always seems to get behind everything and make that last run, so hopefully he lands on the lure. He’s probably the strongest in the race and going the better of the two.”