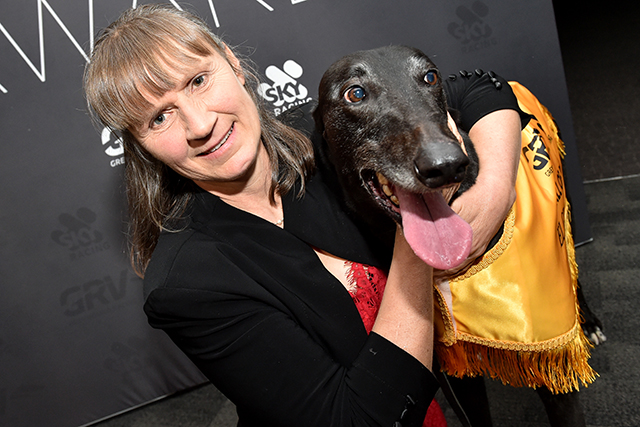 
El Grand Senor was one of the greatest greyhounds of all time, and his name continues to live on through his progeny throughout Australasia.

His owner/trainer/breeder, Carolyn Jones, still remembers the first time she trialled him out of the boxes.

“There was a guy at the track and I used his lure, and we thought they must have clocked the lure. I thought there was no way a 14-month-old fat pup out of the paddock could run a time that quick!” laughs Carolyn.

Carolyn says he was always an outstanding dog as far as temperament went as well. “He was always just the perfectly behaved dog. He was so quiet, just the ideal dog – we loved him before he started racing.”

“He was very life-changing in many ways. Obviously, financially he was very good to my family and I!” says Carolyn.

“But just the whole experience. He was as much a pet as a race dog, and after he was retired, he was very much a pet. You couldn’t get a nicer dog.”

Carolyn describes the Melbourne Cup as the pinnacle.

“All the wins were exciting in their own way, but with the Melbourne Cup, even though you’ve got a good dog you haven’t won it until you’ve won it.”

Sadly, he passed away in 2018 after a shock bone cancer diagnosis.

“I bred his mum and his grandfather and they both lived until they were 14.

“He was in unbelievable condition, his sperm was still as good at 10 as when he as four. But then he went lame. I kept him inside on the lead for a week, but then the first time I let him loose again, he was really lame.

Carolyn still misses him enormously, and enjoys hearing others’ positive feedback on how nice his dogs are.

Two of his progeny are racing for Carolyn at The Meadows on Thursday.

In Race 7, Zipping Hamish will jump from Box 5 in a Mixed 4/5 event over 525m. He wasn’t disgraced in a strong field here last week, and was outstanding winning at Sale prior in BON 29.50, when he showed terrific acceleration.

“If he can get a clear run early, he’s a very, very good dog – but he’s not very reliable out of the boxes. Once he gets back he doesn’t handle himself so well in a field.”

His sister, Zipping Samara, has drawn Box 8 in Race 11, a 525m Grade 5 heat. There have already been a couple of scratchings in the race, and the small field should suit her.