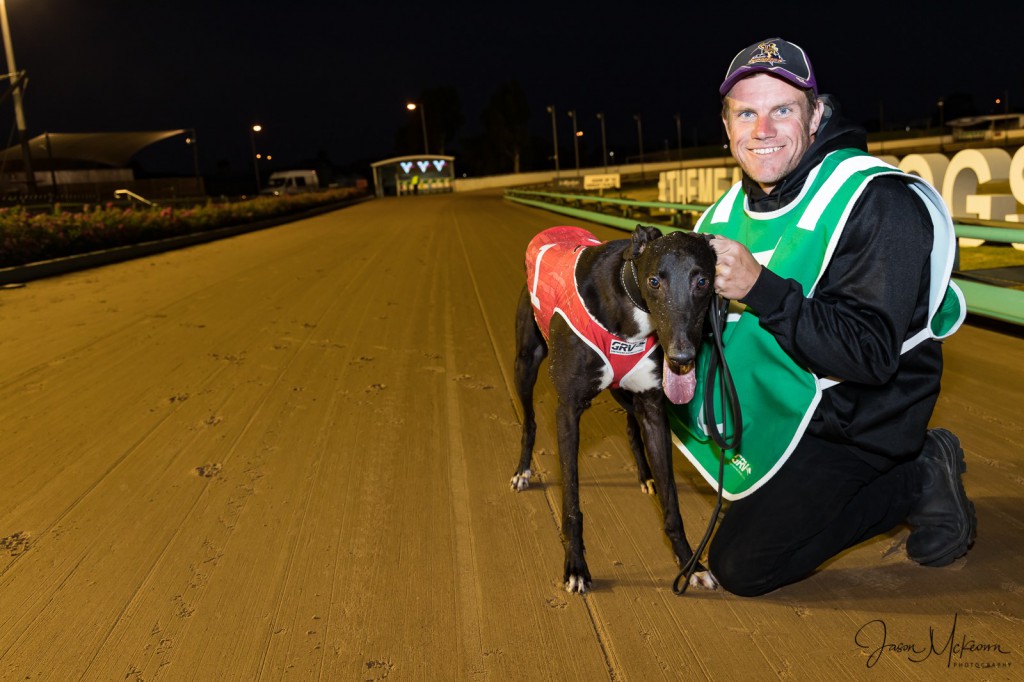 
The Jason and Jessica Sharp team have five runners in at The Meadows on Saturday night, including Route Sixty Six ($4) in Race 11, who has been hitting the line powerfully in his recent races.

“I rate him as our best chance of the night,” says Jason.

In the opener, Jason has Neymar Junior ($26) jumping from Box 7.

“He likes to be wide, so the draw is an advantage.  He’s improving all the time, and it was a good run last week.  He’ll be better over more ground down the track,” says Jason.

In Race 3, Dustification ($4.40) looks a strong each way prospect.  She jumped fast at The Meadows last time, and led for a long way before being claimed late and finishing in third.

“She’s a perennial placegetter, but we’re happy with that – hopefully she keeps placing!  She’s probably not the best dog in that race, but if she jumps well and there’s trouble in behind, she could win.”

In Race 4, Mod Squad ($5.50) was impressive winning at Warrnambool off Box 8 two starts ago in 22.02, when he was fairly away, and then showed excellent acceleration and strode away.

“Steinbrenner will be hard to beat.  Mod Squad is a chance, but he’ll need to lead, and it depends on what the red does,” comments Jason.

Havana Miss ($7) gets the red rug in Race 6, and has been performing admirably over the 600m in recent races.  She was third behind Lucy’s Milo last time, and was making up ground off the leaders late.

“She’s been jumping well, and she wants the fence.  There’s not a lot of speed in the race so she could lead.  I give her a good each-way chance,” says Jason.