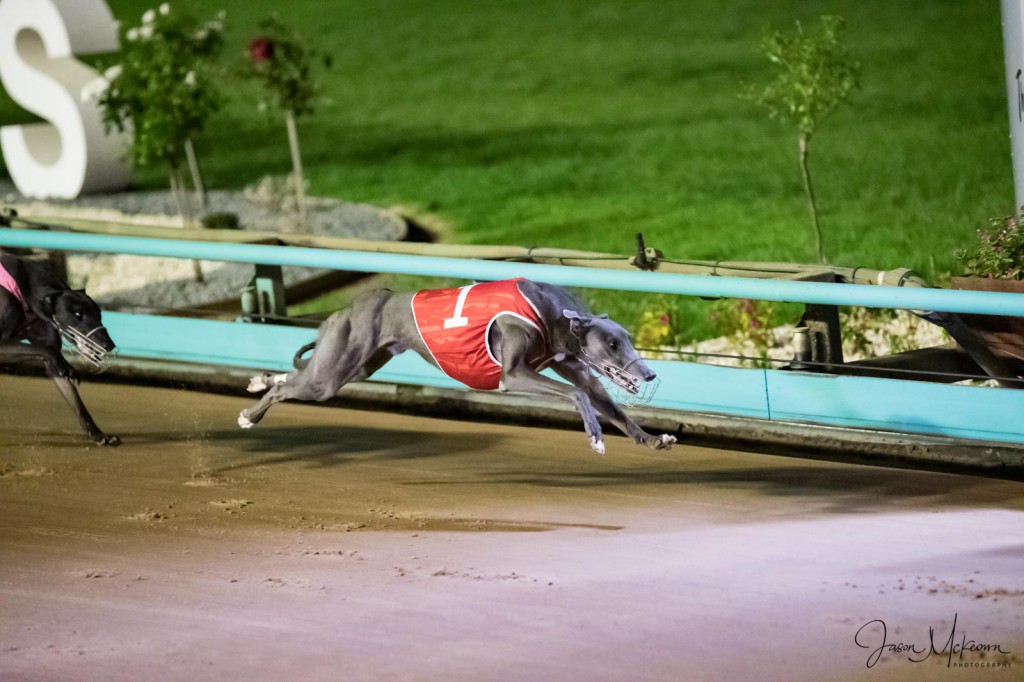 True Detective chalked up his twenty-first career win on Saturday night at The Meadows, bringing his prizemoney total to $325,785.

He earned a Group 1 title back in November, when he took out the Hume Cup at The Meadows.  Since then, he has continued to go from strength to strength over both the 600m and 700m trips.

Trainer Jeff Britton says he was particularly impressed with his win two starts ago at The Meadows, when he got much further back than usual.

“I thought he was out of the race, but then the way that he ran home was incredible – he broke 12 seconds.  There was a lot of trouble in the race, but he blew them away in the end,” says Jeff.

The greyhound’s successes have not just been limited to Victoria; back in January, he won the Garrard’s Gold Cup Final at Albion Park, and soon thereafter was victorious in the Summer Distance Plate Final at Wentworth Park.

“He’d been running around in some 700m races, and had probably been struggling a bit; even though he won that race at Albion Park, it wasn’t super convincingly.  But that day at Wentworth Park, he went 41.87 and he beat home dogs like Blue Moon Rising – and I think that’s the night that he really announced himself as a stayer,” says Jeff.

True Detective is owned by Wade Gallagher and George Farrugia.  George liked what Little Grey had already thrown, and so they purchased the entire Black Magic Opal – Little Grey litter from New South Wales breeder Bruce Fletcher, after selecting Black Magic Opal as the sire themselves.

Wade and George have been involved in greyhounds together for a number of years, and for Wade, his interest in the dogs dates back to his primary school days.

“My father Wayne used to operate the photo finish at the Mt Isa greyhounds and gallops.  We would listen to the Sandown greyhounds together, and my interest probably stems from there,” says Wade.

He’s owned a number of greyhounds over the years, and these days, has an interest in around 15 dogs with his family and George.

“Dad’s retired now, and I send him the fields.  Racing is all about family and friends for us,” says Wade.

Wade says that True Detective is the best greyhound that he and his family have ever been involved in, although concedes that Steinbrenner, which he also co-owns with George, is “probably the fastest dog I’ve owned, but he’s the kind of dog that needs to do everything right at the elite level.”

“The Sandown Cup is a time-honoured race, and has that prestige.”

Jeff Britton confirms that True Detective will be heading towards the Sandown Cup next month.