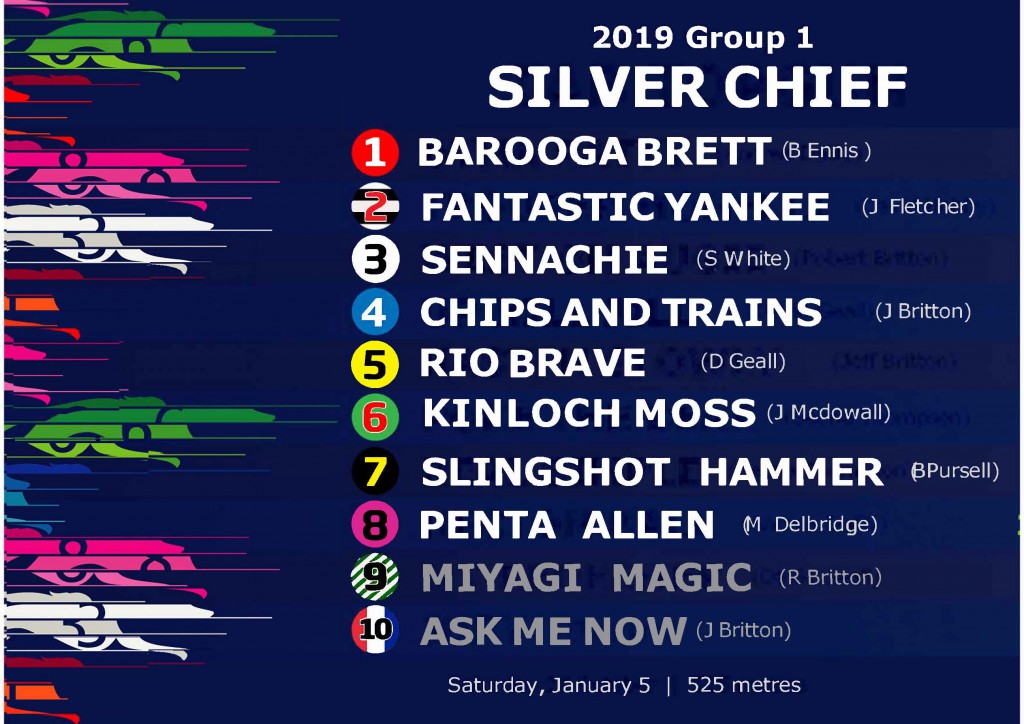 
Gun sprinter Barooga Brett has been installed a $2.30 favourite with TAB after drawing box one in the $145,000 Group 1 Feikuai Greyhounds Silver Chief final at The Meadows over 525 metres next Saturday night.

The son of Barcia Bale and Destini Gold recorded Best of Night figures of 29.69 to win his semi final, and will be looking to break through for his first victory at the highest level after finishing at the tail of the field in July’s Group 1 Maturity Classic at The Meadows behind Dyna Patty. Trained by Brooke Ennis, the blue chaser has had a super two months on the racetrack, including victory in the Melbourne Cup Night sprint and a sizzling 29.08 win at Sandown in early November.

Four interstate greyhounds have qualified for the famous series, including the speedy Fantastic Yankee, who recorded fast splits of 5.02 and 17.63 on his way to a 29.89 victory over Queensland chaser Rio Brave, who’s now in the hands of David Geall. The son of KC And All and Fantastic Dotty has won seven of his 11 race starts and will start from box two in the $100,000-to-the-winner decider.

Chips And Trains – whose prizemoney raises funds for the Legs Eleven Pippa Syndicate to create awareness and support research into children’s brain cancer – qualified for the Silver Chief final after a gutsy second behind Slingshot Hammer in a fast 29.84. Chips And Trains will start from box four in Saturday’s final for caretaker trainer Jeff Britton.

The most inexperienced chaser in the field will be highly promising South Australian chaser Sennachie, who will race in the Group 1 Silver Chief at just his sixth official race start. The fawn son of Fernando Bale and Rhonda Rocks has broken the magical 30-second barrier in both his heat and semi-final placings.

Nullawarre trainer Joy Mcdowall will put the polish on Kinloch Moss after the brindle chaser took out the first semi final in 29.94 – his 10th win from 32 starts.

Next Saturday’s Silver Chief will be the first Group 1 final for 2019, and is the start of three consecutive months of Group racing at The Meadows, including the famous Australian Cup Carnival which kicks off in February.

Family night at The Meadows for Silver Chief final

Barooga Brett scores in a new PB of 29.69 to make it through to his second Group 1 final.
< Previous
Next >