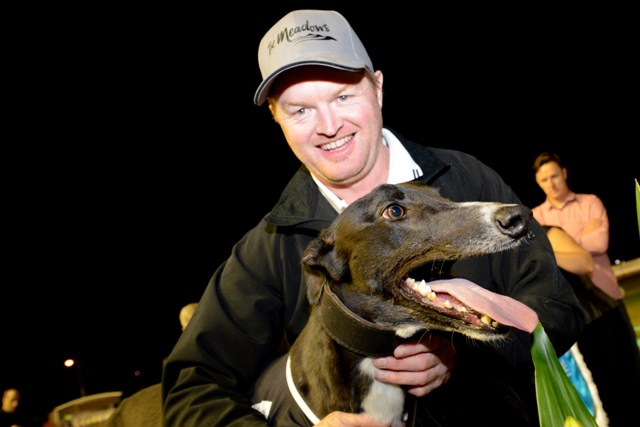 
Electrifying sprinter Lightning Frank – a winner of two Group 1s at The Meadows – has been retired.

The son of Black Magic Opal and Kirabilli Abbie rose to fame after a fantastic victory in the Group 1 Silver Chief in 2017, backing that marvellous victory up six weeks later to beat the best chasers in the land, winning the Group 1 Temlee in a brilliant 29.67. The black flash also started favourite in the 2017 Group 1 Australian Cup after winning his heat in a sizzling 29.53, including a second section of 17.40 – just half a length outside Fernando Bale’s split record.

Trained by Mathew Wright and owned by the Hashtag Syndicate, Lightning Frank finished with 22 wins from 47 starts, earning $338,787 in prizemoney.

Wright explained the decision to retire a greyhound known for his stunning turn of foot.

“He was entered for Ballarat this week because he was going so well (21.80 in a trial at Ballarat on a recent Saturday morning) but he injured his monkey muscle so we’ve decided that he’s had enough. It seems to happen to the real fast greyhounds and he is a rising four-year-old so we thought he has had enough and he has had his fair share of injuries along the way,” said Wright, who hopes his star charge gets his chance as a stud proposition.

“The stud game is a tough one with such dominance from Fernando Bale and Barcia Bale, but we hope he gets his chance. He will relax on the couch, but hopefully he’ll get some females to serve. We will have a chat as to what it will look like going forward in regards to where he will be standing, but if people would like to use him there are straws available. If he isn’t used at stud he will retire as a happy old dog.”

Wright had lots of highlights to pick from, but pin-pointed two wins in particular that stuck in his mind.

“His Temlee win is hard to go past on pure brilliance. His second split run in the Australian Cup heat is still the second quickest ever so sitting back and watching the replays is pretty special now, but his Silver Chief heat win was amazing. He was in all sorts of trouble early in that race and for him to win was something that made us think that the dog was pretty special.