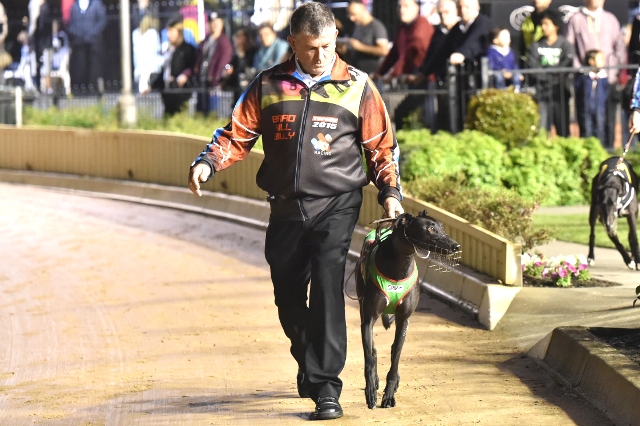 
Classy New South Wales greyhound Brad Hill Billy will line up in the $108,000 Group 1 Hume Cup (600m) at The Meadows on Monday night.

Brad Hill Billy has amassed 29 wins from 78 starts and won $260,000 in prize money, but despite his outstanding record he is rated an outside chance in the Hume Cup at $21 with TAB.

That could be because Brad Hill Billy is yet to win in Victoria in seven attempts, although he did flash home in his Hume Cup heat to be beaten by just a length to Silverali.

Trainer Raymond Smith said his greyhound’s strong finishes have been his trademark throughout his career, making him a crowd favourite.

“He’s the best dog I’ve ever trained, to not be a front-running type of greyhound yet race for 70 starts at the top level is amazing, people seem to love watching a dog that runs home so well,” said Smith, pictured with Brad Hill Billy.

A victory in the Hume Cup would give Smith his first Group 1 as a trainer, a career that stretches back over 40 years, and he came agonisingly close when Brad Hill Billy was beaten by just a quarter of a length to Moreira in the $250,000 to-the-winner Golden Easter Egg in Sydney in March.

A full-time trainer from Forbes in NSW, Smith covers plenty of miles to compete in the best greyhound races in the land with Brad Hill Billy.

“Wentworth Park in Sydney is five hours away and The Meadows is seven hours away, so we’ll head off on Monday morning and make the journey down the Hume Highway to Melbourne. It’d be nice to take the Hume Cup back up the Hume Highway with me,” he laughed.

“That was the first time he has raced at The Meadows without finding trouble. He did well to run second and hopefully that will give him a bit of confidence.”

Smith wasn’t phased about Brad Hill Billy being drawn in box five in the $75,000 to-the-winner final.

“He’s a slow beginner so if he can follow the four (Silverali) and six (Fanta Bale) they might be able to carry him into the race; he’ll rely on his smarts as always to navigate himself through the race.”

“Despite running second in his heat, he ran faster than all five other heat winners, so he looks great value at $21.”

The Hume Cup is held on the eve of thoroughbred racing’s Melbourne Cup, so with a public holiday the next day a big crowd is expected at The Meadows, and racegoers will be hoping Brad Hilly Billy is at his eye-catching best.
The Hume Cup is one of 10 races on the card, along with the $35,000 RSN Group 3 Silver Bullet (525m).

By Declan Schuster (@SchusterDeclan) from The Meadows
.

WATCH: Brad Hill Billy (5) makes up plenty of ground to run second to Silverali (6) in his Hume Cup heat on October 22.
. 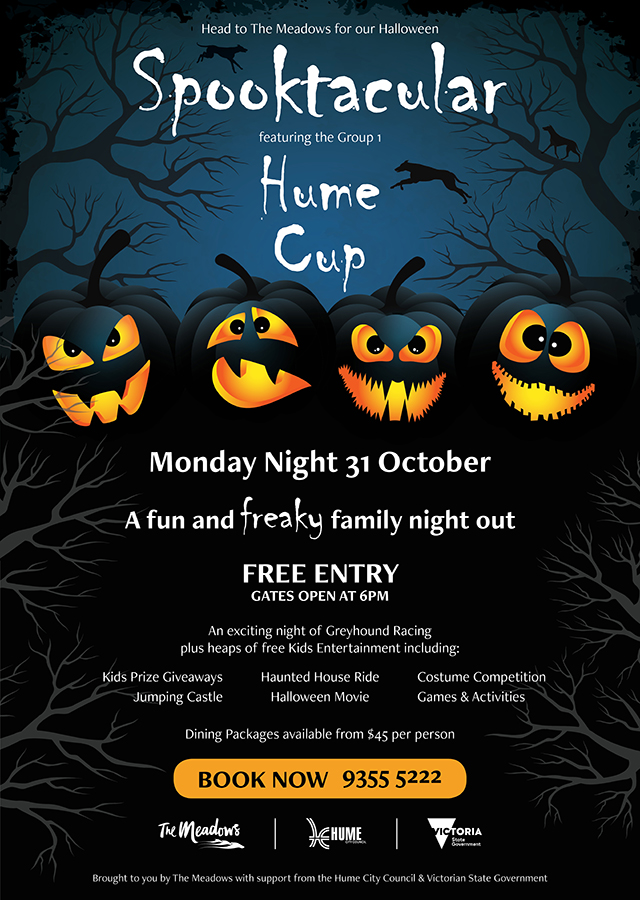