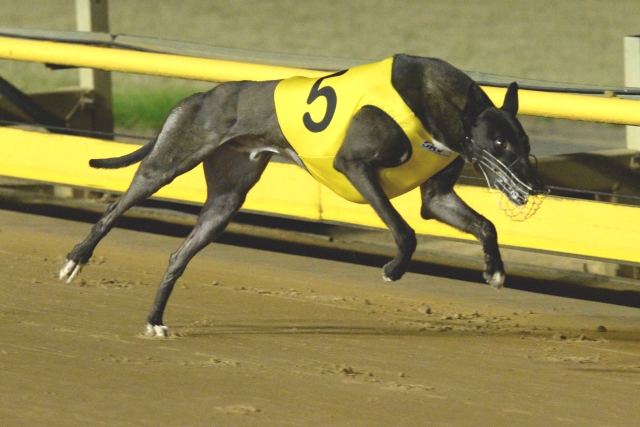 
Once again it’s 12 races set for decision at The Meadows this Saturday night. Competitive racing looks to be the order of the night with the first due to kick of at 7.15pm.

Race 6 on the program (Anzac Day Final) looks a terrific race on paper with great depth. I thought Ride The Rails was absolutely awesome in his BON 29.90 heat win here last week (Replay). After working hard mid race, his strength was second to none shooting away for a large 9 length win against strong opposition. Drawn to follow the speedy Armed And Ready early, I think he will prove too classy with great stength late.

The 600m grade 5 final comes up as Race 7 on the card. The classy Angie Rocks looks the one to beat after being cleaned up posted wide in the run around the first bend in her heat second placing. Once again she has the tricky centre draw to overcome but if she can produce similar strength to some of her sub 30 second runs over the short, she should be winning. The Mario Briganti prepared daughter of Kinloch Brae possesses a tip top turn of foot mid race and with a touch of luck in the early part should see her returning a winner.

Two big guns from the in form Andrea Dailly kennel go head to head in what looks a super strong free for all in Race 8. The recent Group 2 ‘Razldalz’ Launching Pad winner Usain I’m Nutty jumps from box two, but I’ll be leaning to the flying kennel mate Dyna Double One (pictured) despite the awkward draw. No doubt with clear runs we should be in for a cracking spectacle.

Later on in the night I’m keen on Sisco Fiasco on the each way after a few runs recently in top class and also Miss Mayflower who has been racing without any luck at all.

With the last at 10.57pm its Good luck and happy punting!
.
.
The Meadows Formguide: Click Here