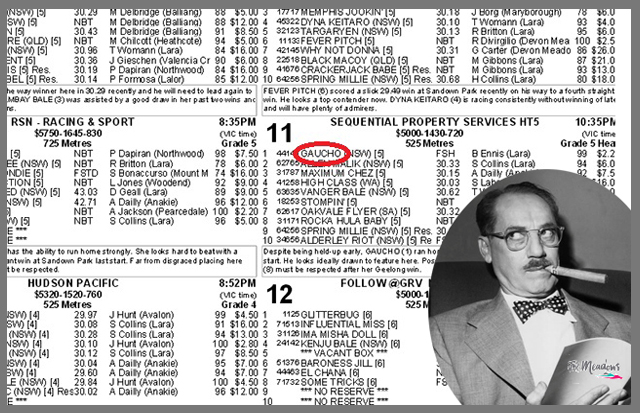 
This Saturday night metropolitan greyhound racing begins at 7.14pm. The program kicks off with a grade 7 over the 525m and I think the consistent Norma Ghost prepared chaser Lady Torah can be running in to the placings. She does step up in class after a strong placing here two runs ago – WATCH.

With a clear run to the first bend I think she will be a terrific place bet.

We then move to the second race of the night and the recent out of form Miss Mayflower can bounce back to her best. Drawn well from the near rails draw in two, the daughter of Collision looks much better suited back to the 500m+. She seemed to be just a shade outpaced as seen in her previous run from box 5 at Ballarat – WATCH.

With less pace going to the first bend here I think she can lead and play as terrific each way punt.

The night sees some former Group race winners go around including the 2013 Brisbane Cup winner Kiss Me Ketut in Race 7 as well as Lamia Bale who has won two Group 2’s and one Group 3 in the past five months who lines up in Race 8  .As well as that we see both minor placegetters in the recent ‘Razldazl’ Launching Pad going head to head with each other in race 11 with Targaryen drawn five and Fever Pitch six.

The improving Gaucho lines up from box one late in the night. Drawn the inside alley in Race 11, this chaser put together a terrific win in a heat of the Launching Pad recently, railing throughout to score there. After finding early trouble at Shepparton Monday night, the Brooke Ennis prepared sprinter flew from ‘a minute back’ as called by RSN’s Matthew Jackson to win – WATCH.

With the rails draw assisting he should be finding a good position and he only has to show similar field sense to his recent Shepparton run to be winning here.

The racing concludes at 10.52pm so Good luck and Happy Punting.
.
.
The Meadows Formguide: Click Here


How James fared last Saturday night at The Meadows…