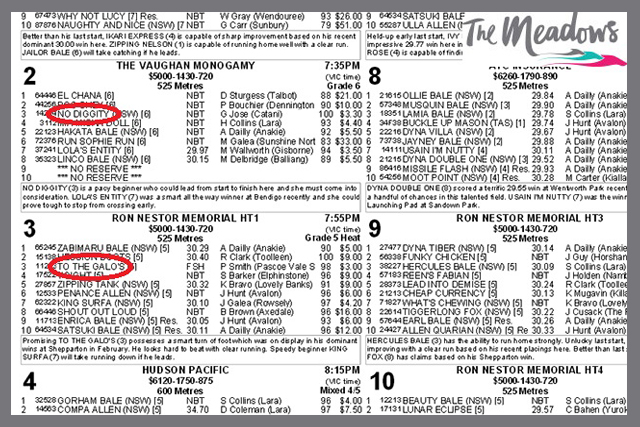 
12 races are set for decision this Saturday night at The Meadows with card getting underway at 7.14pm.

The speedy No Diggity lines up in the second of the night drawn much better than her last run here. Exiting box three on Saturday night, the daughter of Bit Chili has been showing great acceleration once she hits the ground in her races of late. Last week she was been by the highly promising Lunar Eclipse in a flying 29.57sec.

In the run to the first corner she was posted wide and couldn’t get close to rails rounding the first bend, from the better draw this week and a slow beginners drawn her inside, I expect her to run a mighty race.


Watch: No Diggity (8) runs fourth behind Luna Eclipse at The Meadows last Saturday.
.

The well know term ‘turn of foot’ is often used in greyhound racing. This is quite simply the term used for once a greyhound has left the boxes, running the first part of its race and how quickly it can do so.

In my opinion To The Galo’s possesses one of the best turns of foot in greyhound racing throughout Victoria. His box manners can be a little below par, but his sheer acceleration should have him shooting into the early lead and with limited pace drawn around him. The Phil Smith prepared sprinter should turn for home in front with a touch of luck early.
.


Watch: To The Galo’s shows a great turn of foot on the way to a dominant win at Shepparton in February.

After giving them a decent head start in the handicapped staying race last week, Beks draws perfectly in the fifth of the night from box eight. The natural wide looping runner looks suited to an even playing field on Saturday night. His last start second was terrific after being held up throughout the race. He continued to pick his way through and i’ll be expecting him to sit midfield and prove to strong.
.


Watch: Beks (2) came from last and was held up before running 2nd at The Meadows last Saturday night.

We see a terrific free for all being held as Race 8 on the card at 9.35pm. The depth of the race is outstanding with plenty of group class performers.