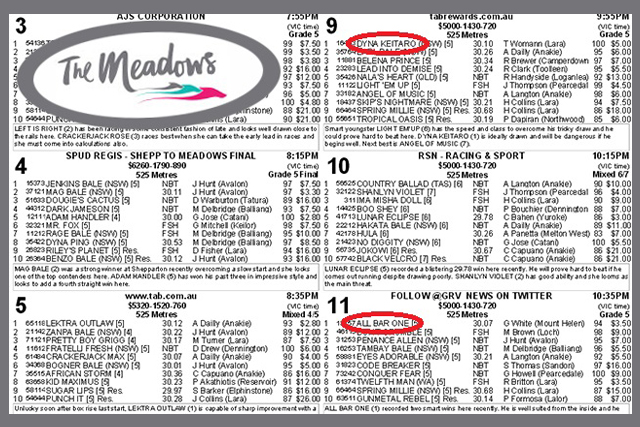 All Aboard the Punting Ship


This Saturday night the national greyhound racing spotlight focuses on the Group 1 Golden Easter Egg held at Sydney’s Wentworth Park, but the Victorian spotlight will be firmly set on a strong program of metropolitan racing at The Meadows.
.
Racing begins with a handicapped race for the stayers over the 725m at 7.15pm .The former Queenslander Dzeko drawn from the front row, has started to find his feet here in Victoria.
.
His win two runs at Sandown Park looked super running 41.668sec for the 715m. I feel he does his best racing when he doesn’t get caught too far back behind runners and with the aid of the handicap giving him a head start effectively, I think the Angela Jackson trained stayer can almost lead and prove hard to beat.
.
Watch: Dzeko (5) wins at Sandown Park on March 19 in 41.668sec
.

With even races being the order of the night, finding a winner may not be easy. I think in the ninth race Dyna Keitaro has drawn perfectly from the inside alley. He’s made in quite obvious in his past campaign that he is desperate for the rails with some crashing performances early in his last few runs.
.
With the dangers drawn to his immediate outside in boxes two and three, I think Dyna Keitaro just needs to position up in the top three to be hard to beat.
. Watch: Dyna Keitaro (8) never gave in when running an impressive third at The Meadows last Saturday night.
.
Later on in the night All Bar One lines up from her favourite alley (box 1) in which she has tasted success in 4 of her 18 starts to date.
.
With a smart P.B of 30.066sec from this draw here at the venue, the daughter of Bit Chilli should be using the rails draw to full advantage and with Don’t Crumble (2) drawn her outside running a straight line early, I think she can be getting that imperative clear run early and be winning.
.
All Bar One (1) wins at The Meadows on February 25 in 30.066sec.
.