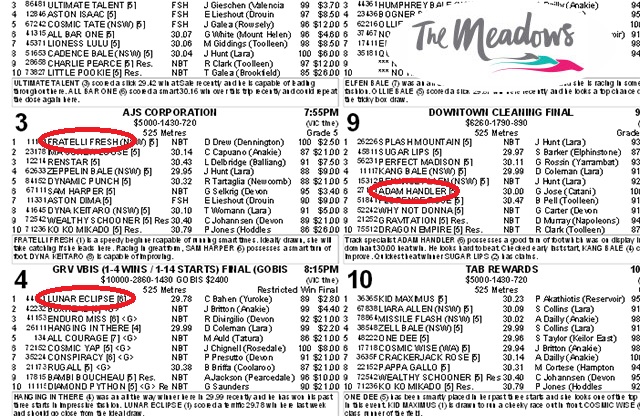 Eclipse on the Cards at The Meadows


After a big night at Sandown Park with the heats of the Launching Pad, metropolitan greyhound racing returns to The Meadows for Saturday night racing with the first set for decision at 7.15pm.

Fratelli Fresh (1)  lines up from the rails draw in the third of the night and the Ray and Dustin Drew prepared daughter of High Earner should prove extremely hard to beat. The hard railing sprinter produced a smart 27.81 win a Bendigo last outing over the 500m and once again from a suitable alley should go close.

The GRV VBIS one to four win final comes up as the fourth race on the program and it’s hard to look past Lunar Eclipse (1). The son of Cosmic rumble possesses a breath taking turn of foot and a keen liking to find the inside of the track early and we saw that in his flying 29.78 win here last week.
.

From the inside trap I’d expect Lunar Eclipse (1) to kick up into the lead and prove to classy with an all the way win for Cameron Bahen.

We then move straight on to Race 9 in which I’m keen on the in form Adam Handler (6)  drawn out in box six. The straight running son of Cosmic Rumble looks to possess nice early pace running to the first corner here at The Meadows.

With his last start smart 30.00 even win here, he should be mighty hard to beat especially with not too much speed his immediate inside. The run, hopefully a clear one to the first bend will be all important for his chances.
.

With some high quality racing throughout the night I was quite keen on the chances of Missile Flash (3) who’s drawn very well in Race 10 and also Jameila Twist (5) who could get back to her best from the rails alley in race 11 returning to The Meadows.

The last on the 12 race card wraps up at 10.58pm so good luck and Happy Punting!
.
.
The Meadows Formguide: Click Here
.

Note: A BIG6 carryover of $32,635.58 from Sandown Park on Thursday which will jackpot to The Meadows this Saturday night