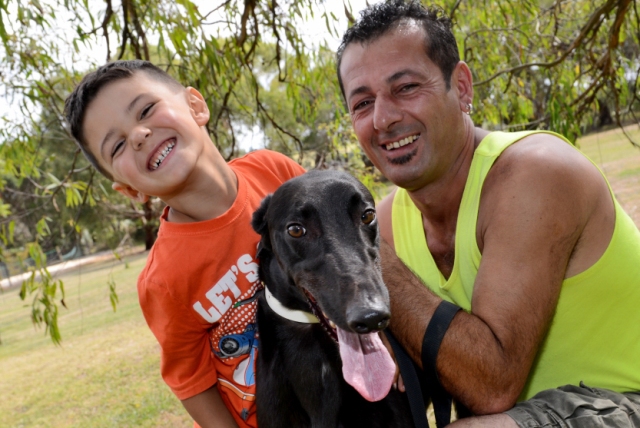 Magic of Emrys on Show in Australian Cup


The Mornington Peninsula isn’t traditional greyhound racing territory, but it is the home of Australian Cup finalist Emrys.

Based on a large property in Tuerong, Emrys has spacious paddocks to gallop in and is just a short drive from the beach, where the salt water aids in his recovery from a trip to the races.

“We moved here five years ago and the property is actually owned by my partner’s parents,” trainer Mario Briganti said.

“We have set it up with some nice paddocks for our pups to run around in, and we are enjoying some success at the moment with Emrys racing so well.”

Emrys is one of the outsiders in tomorrow’s Australian Cup, but Briganti believes an upset could be on the cards.

His greyhound has won three in a row, and despite him drawing the potentially awkward box 5, Briganti believes it could work to his advantage.

“Normally I wouldn’t be happy with box 5, but with Luca Neveelk drawn in box 4 it could work well for us.”

“Luca Neveelk is a brilliant beginner and he is likely to cross to the rail. I’m just hoping that Emrys can follow his lead, and if that’s the case then he’s in with a sneaky chance because he’s pretty strong,” he said.

Emrys is owned by the Rat Pack Syndicate, which is managed by renowned greyhound punter Boris Bertschik, who also gives the greyhound some hope.

“Lamia Bale deserves to be favourite and in my mind is the one to beat, but Emrys is an excellent each way chance. That said, I won’t be backing him because I backed him at $151.00 (to win) and $38.50 to run a place prior to the heats.”

“He (Emrys) is the youngest greyhound in the race and he has the least number of wins (eight) among the finalists, but make no mistake he can win it.”

“In 11 starts at The Meadows he has never been run down,” Bertschik said.

The Maribyrnong owner describes having an Australian Cup finalist as a ‘dream come true’, and he gave an insight into his greyhound’s name.

“He may not be the best dog in the race, but he is the best named dog in the race. He is sired by Magic Sprite, and if you google Emrys you’ll find that it was Merlin the Magician’s real name,” he said.

With a $250,000 first prize up for grabs, it’ll be a magical night for Briganti and the Rat Pack Syndicate should Emrys win tomorrow.