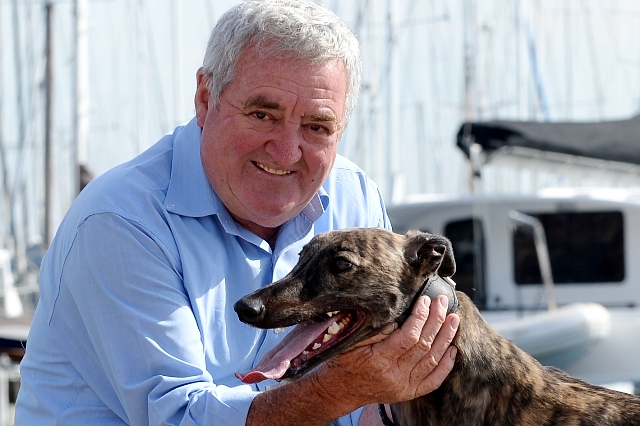 
Twelve months ago Marcus Joe was preparing to run in the Group 1 Australian Cup final.

Now trainer Barry Moloney is hoping his brindle sprinter can make the final of this prestigious event for the second year running.

Moloney was thrilled with Marcus Joe’s performance in the Group 1 Temlee (525m) last weekend, when he finished third behind My Bro Fabio after gaining a start in the invitational as a reserve and exiting the much sought after box 1.

On Saturday he will exit box 1 again in one of eight heats of the Australian Cup – and he’ll be one of the favourites in the race – with a win to secure him a place in the $250,000 to-the-winner final on March 7.

“Prior to the Temlee Marcus Joe had had box 1 five times and never ran a place, but it was a different story this time around,” Moloney said.

“The Temlee was his first race in three weeks as I thought I’d freshen him up for the Austalian Cup Carnival. So the fact he was fresh may have helped him, but (coincidentally) I also trialled him twice out of the red box recently and I think that made a little bit of difference.”

“He was actually working into a winning position in the Temlee, but I had one eye on him and another on My Bro Fabio, because I knew he (My Bro Fabio) would be coming home hard, and as it turned out he was too strong.”

“I’m just rapt that he (Marcus Joe) ran a place in a race like the Temlee though, especially as he was short of a run. He’s back on song.”

Moloney, from Marcus Hill, is proud that Marcus Joe has been able to compete at the top level for 18 months since winning the 2013 Group 1 Maturity Classic at The Meadows.

“He has been very consistent throughout his career. He’s nearly four and has lost a whisker (of speed), but he has made up for that in terms of his race smarts. He just knows what to do (in his races),” he said.

“The whole card is a punter’s nightmare, and it doesn’t get any easier for Marcus Joe,” he said.

“He is up against younger dogs who are running so quick, such as (Warragul Cup winner) Ronray Spirit. He (Ronray Spirit) might struggle to run out the 525m but with such an experienced trainer (Terry Reid) he has got to be in with a chance.”

“Chica Destacada is another one of the stars in his heat. I don’t think we’ve seen the best of her at The Meadows (two starts without a placing) but she has shown what she can do on the big stage.”

Moloney said Marcus Joe would have to be at his best from boxrise if he is to win his heat.

While obviously delighted with the fanfare that came with having a runner in the Australian Cup last year, Moloney sees the race at one that got away with his star finding trouble and finishing in sixth place.

“He was very unlucky. He came out of box 8 and was right on the hammer of (winner) Buckle Up Wes heading into the first turn when his kennelmate at the time Kiss Me Ketut crashed into him on the first bend and as it turned out he (Marcus Joe) didn’t run a drum,” he said.

Moloney said that at 76 this could be his “swansong” as trainer at group level, especially with Marcus Joe in the twilight of his career, which includes 20 wins from 63 starts and $275,000 in prize money.

“It’d be nice to get another one like him but it’s unlikely at my age. I bred him and he was part of a litter of 10 that has won plenty of races between them.”

“He has been such an honest dog and his bloodlines go back to the ‘Mint’ line which has been prominent in NSW since the 1970s which is remarkable in itself, so I think he might make a handy stud dog once he retires,” he said.

Marcus Joe (Velocette – Mojo Glory) will contest Race 7 on Saturday night, which is scheduled for 9:15pm. 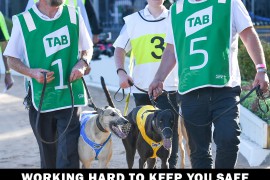 COVID-19 update from The Meadows 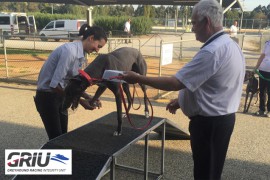 Greyhound racing to continue in Victoria