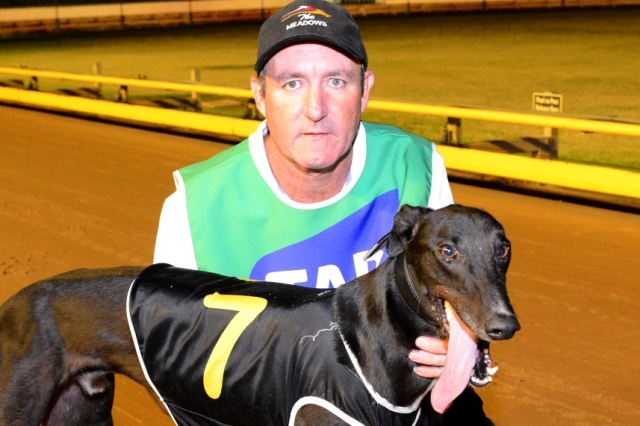 
Trainer Mick Carter is chasing his first Group 1 win in Saturday night’s AJS Corporation Silver Chief at The Meadows, and he believes he has the greyhound in his corner to do so.

Despite currently being a $23 chance on TAB Fixed Odds, Midnight Flynn possesses the right mix of brilliance and determination to cause a boilover and snare the $100,000 first prize, according to Violet Town trainer.

Midnight Flynn (High Earner – Little Zeva), bred by the Sherida Hastie Syndicate and owned by John Carr, is yet to miss a place in 13 starts, winning seven times and being placed in his other six starts.

“He’s as tough as they come. He’s perfectly drawn in Box 7 and if they make a mistake out in front they’ll know he’s there,” Carter said.

“He rides bumps and just keeps on chasing, which has been a real key to his consistency.”

After winning a heat of the Silver Chief Classic in an impressive 29.837sec, Midnight Flynn was beaten by recent Group 1 Hobart Thousand winner Above All in his semi-final last week, going down by more than three lengths after leading mid-race.

“He wasn’t quite himself last week. He pulled up a bit sore in his hip which affected his run. I’m working on him this week though and he’ll be 100 per cent by Saturday,” Carter said.