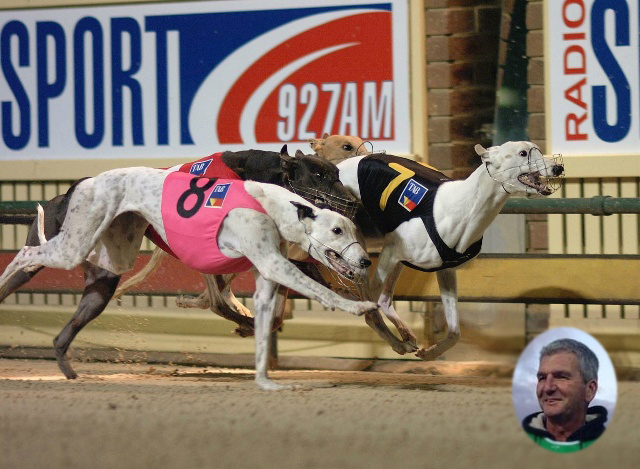 
Zipping Maggie stunned onlookers when beating staying sweethearts Xylia Allen and Sweet It Is in last weekend’s Group 3 Chairman’s Cup (720m) at Wentworth Park, but one man that wasn’t surprised was her trainer Peter Dapiran.

“You never go into these races expecting to win, but I felt that she had the ability to mix it with the likes of Xylia Allen and Sweet It Is, and it was just a matter of getting a bit more experience.”

“With some of the times she has posted I’m surprised people hadn’t picked up sooner that she has the potential to be among the best stayers in Australia,” Dapiran said of the victory, in which Zipping Maggie chalked up five straight wins, paid $10.40 and snared a $25,000 first prize.

Zipping Maggie will again take on Xylia Allen – Australia’s all-time record prize money earner and runner-up in the Chairman’s Cup – in a heat of the Group 3 Topcat Video Cup (725m) at The Meadows on Saturday night in Race 5, the first leg of the Quaddie, at 8:38pm.

Sweet It Is is drawn in the other heat (Race 7 @ 9:22pm), with the first four placegetters in each race to qualify for the $35,000 final on Saturday week.

Dapiran, from the Victorian town of Northwood (near Seymour), is excited at the prospect of Zipping Maggie showing that last week’s convincing five-length win was no fluke.

Zipping Maggie has a record of 11 wins (and five placings) from 21 starts and with her first group win under her belt it appears that the sky is the limit for her given she is not yet two and a half.

In fact, her enormous potential and front-running style has prompted Dapiran to compare her to one of the best stayers of the past 20 years, the all-conquering Bentley Babe.

Dapiran guided Bentley Babe, who was the ultimate front-running stayer, to five group wins including the Sandown Cup and the Sale Cup.

“Bentley Babe was supremely talented. She won five group races and she broke the track record at Sandown over 715m and held track records over 550m.”

“She was runner-up to (immortal sprinter) Brett Lee in the Victorian Greyhound of the Year in 2000 and she was unlucky to strike him because in most other years she would probably have won it,” he said.

While he has great admiration for what Bentley Babe achieved, Dapiran believes that Zipping Maggie could reach similar heights.

“There are a lot more feature races around today for stayers than there was when Bentley Babe was racing. And the other thing about Bentley Babe is that she wasn’t a good traveller.”

“She did win a heat of the Gold Cup in Brisbane but she never won a group final interstate. On the other hand, Zipping Maggie is an excellent traveller and she showed last week that she can win on the road, so the future is looking bright,” he said.

The immediate future centres around this Saturday night, with Zipping Maggie drawn in Box 8 and Xylia Allen in Box 4.

“With all due respect to the other greyhounds in their heat, I think that whoever leads out of Zipping Maggie and Xylia Allen will win.”

Both greyhounds are expected to lead the rest of the field, with The Watchdog’s early speed maps rating them off the chart at more than 68 kilometres per hour into the first turn.